By overseas standards, churches in New Zealand have a relatively short history, however there is one feature about St James and the historic churches in Thames that make them unique. The older churches of St James and St Georges in Thames, and St Andrews in Coromandel are built of Kauri that grew close by on the Coromandel. These places of worship may be but a hundred or so years old, but the timber from which they are built may be up to 2000 years old. So when you stand inside St James, remember that you are surrounded by history that truly dates back to the birth of Christ.

Prior to 1867 there were few Pakeha living in the vicinity of Thames, however the local Maori, Ngāti Maru, had a series of pa established along the Thames hillsides. The stronghold of Ngāti Maru has been the Thames area.[1] Ngāti Maru are descendants of Te Ngako, also known as Te Ngakohua, the son of Marutūāhu, after whom the tribe is named. The immigrant community in Coromandel was far more established, and it was to Coromandel Town in 1840 that the “founding fathers” of Auckland William Brown and John Logan Campbell arrived, and then set out to establish what is now NZ’s largest city. The primary industry was the harvesting of the fine timber trees growing on the peninsula.

During the 1850s Ngati Maru were one of the main tribes providing large supplies of food to the new capital Auckland. But on 1st August 1867 all that was about to change. Gold had been discovered earlier in the Coromandel in 1852.  Initially opinion was divided among the tribe whether they should allow Europeans access but they decided in favour when a government agent agreed to confine miners to one area, create a Maori police force to enforce this and pay Ngati Maru for every licence sold by the government. When gold was found by the sons of a chief, he sent them to Auckland to spread the news and create a rush. Tension was created because under New Zealand law land on which gold was found could be purchased by the state. In some cases land was leased directly from Maori by large mining firms. Then on 1st August 1868 the Thames Goldfields was declared open. Thames quickly changed from a small Maori kainga to a large European town of 40,000 people.  18,000 people arrived in the first 3 months. There were two towns Shortland and Grahams Town. To quote the “Thames Miner’s Guide” of 1868 :

“The only drawback to Shortland is the mud; literally speaking, you cannot walk along the streets without danger of being swamped”

The Presbyterian Church in Thames did not gradually grow up. It sprang into being with an energetic membership of up to 200 persons. Services were held fortnightly, organized by the Auckland Presbytery in the old Court House, the American Theatre, the Wesleyan Chapel, and the New Court House. Ministers travelled to Thames by paddle steamer, and committee meetings were held in warehouses, homes, and hotel lounges.

In February 1868 a building committee was formed and given a brief to build a church to hold a congregation of 300, for a sum not exceeding £150. On 11 March, 1868 a Mr Morgan offered to prepare plans and specifications. A week later the plans and specifications were approved and tenders were called – to close the following week. On 25th March 1868 a tender for £150 was accepted, and on 3rd May 1868, the Church was opened. The First Church was built on land donated by the Chiefs Te Hoterini and Wiropi Taipari on the corner of Rolleston and Richmond Streets, on the site where the church manse is situated today. On 17th September 1868 the Rev Jas Hill was called and was inducted on 28th October 1868. In the meantime a house was purchased in Auckland for use as the Manse. The cost was £42 and a tender for its removal transport to Thames by sea and re-erection on a site behind the church of £65 was accepted.

Within 8 months a congregation had bee constituted, a church erected, a Minister inducted, and a Manse shifted from Auckland to Thames. Three Sunday Schools were established – one each in Shortland, Grahams Town, and Tararu, together with preaching stations at Tapu, Tararu, and Puriri.

By 18970 the first church was proving too small and plans were made to look at providing a bigger one. A site on the corner of Pahau and Pollen Streets was chosen and purchased.The original land deeds show that the site comprised seven sections. The original sites were sold by Ngatiawa Pahau and another - hence the name of the street to the north of the building. The church built on the site was opened in 1871 with a congregation of 450 and cost £450. There are no records as who was the designer or builder of the church, but it is still standing today, and is in use almost daily by the community for a variety of activities. At it's opening the Church took the name of St James 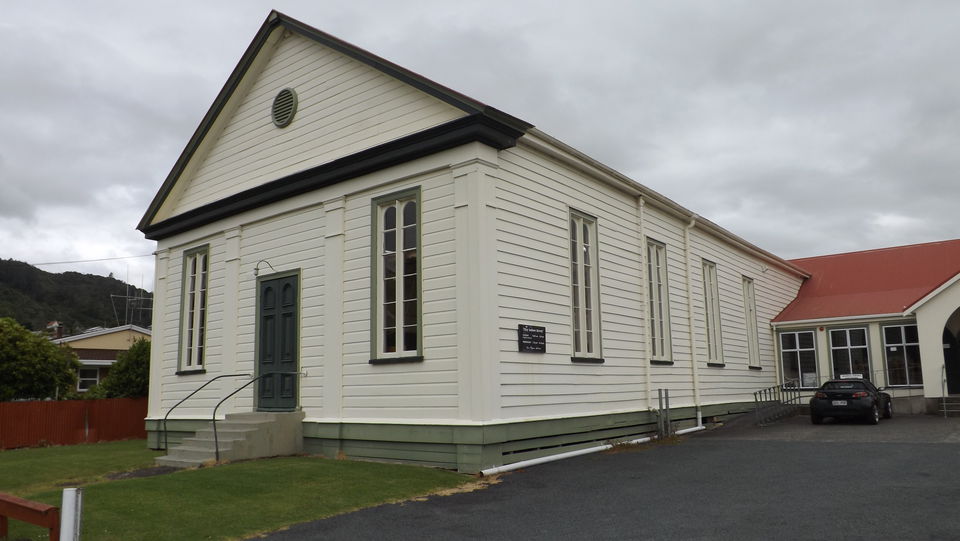 In Sepember 1896 a congregational meeting gave approval to proceed with the building of a new church to seat 600 people, and in October Mr W.H Skinner was appointed architect. The second Church was moved to make way, and railway irons were lent by A and G Price and the building, which is now St James Hall, was towed by a team of bullocks to its present site facing Pahau St. St James Church was built by Mr W.M Hay, and he started work on the building in December 1897, The Church was completed and opened for its first service on Sunday 24 July 1898.

History of the Methodist Church in Thames

This section is being currently worked on and will be added later.